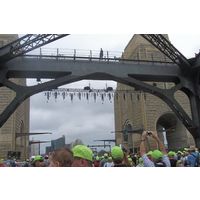 Did you know Windsong Chimes featured on the day of the Sydney Harbour Bridge 75th anniversary celebrations as part of the soundscape.  A series of sound pods were created for people to walk through as they crossed the bridge to give them a sense of the 75 years of the bridge's history.

The Musical Director of the Harbour Bridge 75 Project chose 105 chimes of three different sizes (Abbey, Concerto and Valley Bells) to act as a finale for the soundscape. The chimes were mounted on a 15 metre lighting tress which spanned the southern arch of the bridge.

The metallic yet beautiful sound of the  chimes represented the bridge speaking back to people as they  completed the walk and a total of 250,000 people heard them chiming.